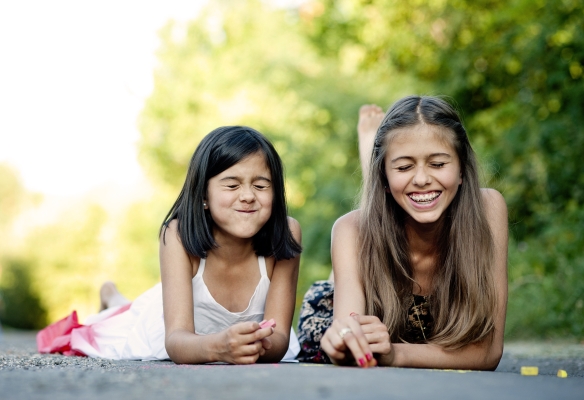 Take time today to feel like a child again; then give some much needed grace to those around you who would be better served by “growing down” – instead of “up.”

I close my eyes and I’m there, on the front lawn, at dusk.

Giggling girls, tired of straining to defy gravity (some of us just weren’t made to be gymnasts), have traded cartwheels and handstands for a wild game of Statues.

And there I am in the center of the yard, outstretched arm grasped by two small hands, ready to be spun at speeds faster than my mother would approve. On the verge of dizziness, I feel my arm fly free and momentum carry me around the yard as if I’ve been flung at full speed from a merry-go-round. Slowing down, eventually I land in an awkwardly triumphant pose, which I hold as best I can while fighting the pull that threatens to take me to the ground. Hardly breathing, I wait like a statue as the girls circle me, prolonging their decision in order just to see me sweat; and then, the naming.

Breaking pose, I fall laughing to the ground before another round begins.

The game of Statues.

Have you ever played? It’s not unlike the way I feel inside as I close my eyes tonight, tired of straining to defy gravity and entropy and the clock that ticks this day into the next at a speed I don’t approve. Today life has spun me around and around, and although I’ve a sense that it ought to be fun, it isn’t and I’m dizzy and I just want to make it stop.

The names I expect, considering the shape I’m in, are names like:

I’m sweating it now (just a hot flash?). I’m doing my best just to hold it together, to keep from collapsing into a puddle of tears, when the Voice speaks an unexpected name over me. And then another.

Spun, flung, landed and named, the statue breaks pose and I fall, laughing and crying, into the arms of the One whose healing Presence strengthens me for tomorrow.