Rain or shine, sleet or snow – he was always there. Sitting on a bucket-turned-upside-down as a stool, I would drive past him on my way to the post office in the small community where I live. He always made eye contact. He sometimes smiled. He usually waved or nodded cordially in my direction. Once he tried to bum a cigarette from me, but I was powerless to help him out with that one. He was a fixture there, at the crossroads of neighborly concern and I’m-late-for-an-appointment, but until yesterday, I didn’t even know his name. It was Bob.

I turned the corner toward the post office yesterday and noticed an empty spot on the shoulder where he would normally sit. Instead of the elderly, white-haired man with a weed eater, propped up against the fence in a sea of political signage was this sign: 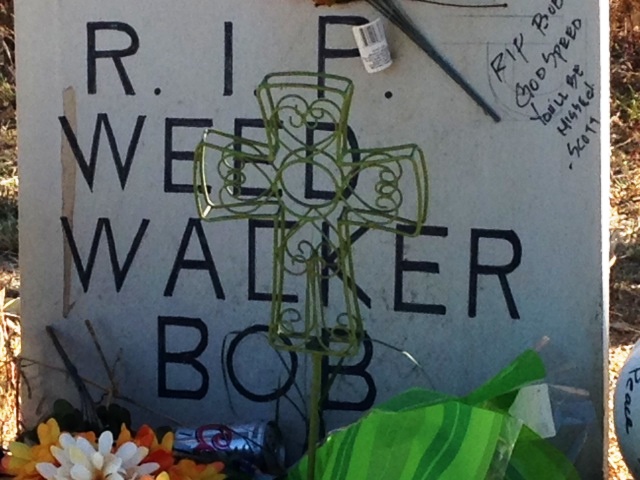 And it made me sad. It makes me sad. And it makes me ask questions – some of which make me uncomfortable today.

What was my responsibility to Weed-Wacker Bob? What I mean is – as a child of God with resources to share, should I have given him something? The only thing he ever asked me for was a cigarette. And the opportunity to whack my weeds. I gave him neither. Instead, I smiled and waved and drove right on by. Year after year. After year.

How did he die? I wonder. Was he alone? Did he have a family? Friends? Loyal landscaping clients? There must have been others who actually stopped and talked to Bob, maybe giving him a job or a ride or a cigarette. Right? Someone else surely has been picking up the slack all these years for Weed-Wacker Bob… They must have!

But what if I’m wrong and everyone else on their way to the post office smiled and waved and drove right on by – just like me?

I set the bar low with Weed-Wacker Bob, and yet Jesus says:

“Ask yourself what you want people to do for you, then grab the initiative and do it for them.” Matthew 7:12 (The Message)

I am faced on this day with a mirror of sorts, found in the pages of God’s Word. I don’t need to ask myself what I want from others – I know I set the bar high in that department. And there was clearly no initiative-grabbing going on in my head – no doing-it-for-them as I smiled and waved and drove on by.

And this is not okay.

I am in need of rescue, just like Weed-Wacker Bob and everyone else who has ever found themselves in a puddle of regret and despair and at the end of themselves. And yet – thanks be to God! – this is right where He wants us to be:

“You’re blessed when you’re at the end of your rope. With less of you there is more of God and his rule.” (Matthew 5:3, The Message)

That is good news, because today I’m feeling pretty darn less of and in desperate need of God’s more-than-enough.