Blog - Latest News
You are here: Home1 / One Great Hope/Blog ARCHIVE2 / PINK Tuesday3 / My Life as a Piñata 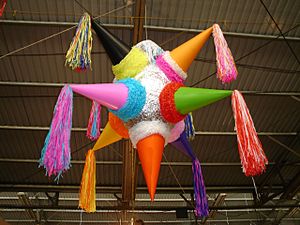 I grew up in Arizona.

My children have grown up in Arizona.

With this in mind, you’ll understand that when I hear the word broken, I think piñata.

I would argue that until you’ve had your arms elbow-deep in papier mache, you haven’t really experienced creation (or at least the act of creating). I still remember the first piñata that my sister and I made together…

It started with a balloon. It received coat after coat (after coat!) of newspaper dipped in flour-paste. In my youthful impatience (not much has changed there), I probably layered too quickly, not allowing each generous covering to dry completely before slathering another one on. No matter. It was a fine piñata by any 8 year old’s standards.

As an aside, this creative endeavor was inevitably turned into a mouse. After all, what else CAN an inflated balloon be? An egg?

A lot of white paint. Some whiskers. An opening cut. A LOT of candy stuffed inside. Resealing the hatch. Attaching a string. Hanging from the front yard Palo Verde tree. Add a blindfold and a broom handle. Party-goers get in line…

I don’t know about you, but sometimes I feel like a piñata – dangling mid-air. Gratefully, God’s creative energy is so much more skillful than mine (or we’d all be egg-shaped mice). There are days I wish I looked as festive and colorful as a tissue paper piñata, as if looking good was the goal, but the purpose of a piñata isn’t to float on the breeze indefinitely.

The purpose of a piñata – its role in the party – is to be broken.

After all – that’s how we get to the good stuff, right?

The very first women’s retreat I ever attended took place in a mountain summer home. There were only 5 of us there that weekend – all of us young mothers who couldn’t help but rejoice at the opportunity to spend a child-free weekend, hours away from home. Our theme that weekend was brokenness, and while I hate to admit that I don’t remember much about the teaching, I do remember the piñata.

Our leader hung it outside on the porch, and 5 grown women took turns (blindfolded, of course) wielding the weapon of destruction. We swung hard and whacked mightily until finally the piñata completed its mission and spilled chocolate candy all over the wood planks at our feet. Like children, we giggled and rushed in to grab at our favorite treats, collecting the goodies and enjoying every last bite.

While we ate our treats, I thought about Jesus, whose body was broken for me.

I thought about Jesus, who teaches that,

‘Unless a grain of wheat falls to the ground and dies, it remains only one seed. But if it dies, it produces many seeds. Anyone who loves his life will lose it. But anyone who hates his life in this world will keep it and have eternal life.’ John 12:24-25 (NIrV)

I realized then that my buttoned-up, self-contained, dangling-piñata life fails to bring glory to God. Hanging there, on display, the only thing I’m good for is a photograph. Maybe a second glance. Maybe a comment. And then, you’re bored. Ready to move on.

That is, unless you have a broomstick in your hand.

I could preserve this shell of a life and steer clear of the weapon you wield, but Jesus says that would be fruitless – like choosing death. No, my friend. Today I choose to be battered and beaten until the holes in this fabric that I’m made of are sizable enough to let the good stuff through. To let what I’m truly made of – placed within me by the hands of the Creator Himself – be poured out like candy from a piñata at an Arizona birthday party.

My life as a piñata. There is no higher calling.